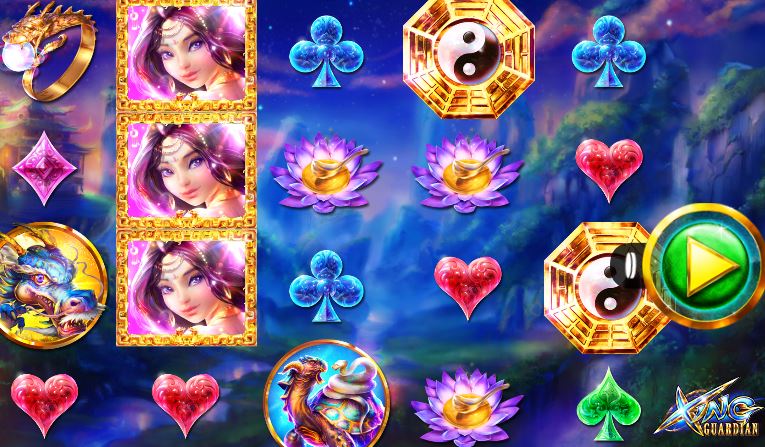 Don’t expect too much in the way of Xing Guardian slot graphics. You’re looking at a lot of basic imagery upon the reels of this game, with astronomy intermixed with your usual Chinese culture themed symbols, such as the predictable yin and yang icons and the like.

Wagers are as cheap as chips

Xing Guardian features a total of 5 reels and 1,024 paylines to play with. The latter is what really gives the Xing Guardian slot game its kick. Despite there being over one-thousands paylines on the reels of this slot, you will still only end up wagering small sums. Coin values range from 0.10 up to 2.50, and floor and ceiling bets are pegged at 0.50 to just 125.00 per spin.

Players will want to keep their eyes on the good looking princess icon for more reasons than the obvious. She is a wild symbol can substitute for all other symbols in the game, excluding the scatter. It is also worth mentioning that the Xing Guardian video slot’s wild symbols appear stacked.

Scatters take the form of the predictable yin and yang symbol. If they appear 3, 4 or 5 times in any positions on the screen, you will pocket wins worth 2x, 5x, or 10x your total bet, as well as trigger a free spins feature.

There are two other perks to playing this slot. There is a Rise of the Dragon randomly triggered feature, which can see players land a stack of wilds in the base game.

There is also a Xing Guardian Locked Reels feature, which can also be triggered randomly. When it is, players will land between 2 and 5 locked reels, with the reels mirroring the same symbols boosting your chances of landing a win.

Of all the many Xing Guardian slot bonuses, the free spins feature is the best. It can offer players 10 free spins when 3 or more scatters appear on the reels. During the bonus, the Xing Guardian locked reels feature is guaranteed on every spin, and you can always retrigger the feature for more spins.

Just another brick in the wall?

The Xing Guardian slot is entertaining, it is cheeky, and it has plenty to offer players. True the astronomy and Chinese culture theme is a little tired, but the features are more than enjoyable. This slot could end up just another brick in the wall, but we think it will do NextGen Gaming rather proud.