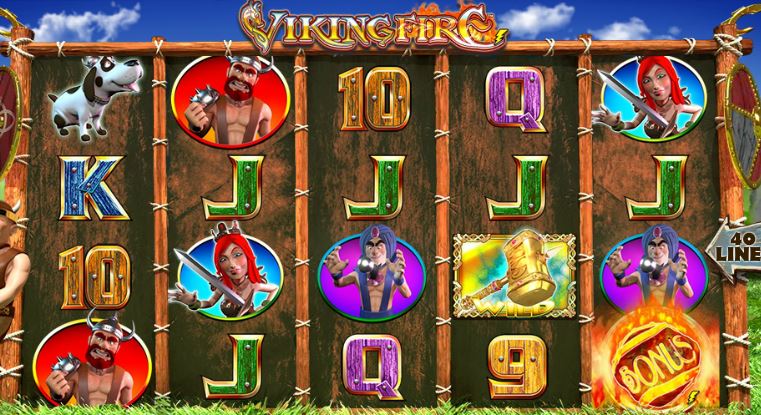 Ever since the HBO television series Vikings aired, people have reignited their interest in the Norse warriors. There have been countless Viking and Norse mythology themed casino games of late, and the new Lightning Box Games developed Viking Fire slot machine is the latest. Don’t expect a serious gaming experience with the Viking Fire slot. As you will see in our Viking Fire slot review, this one’s coated with cheese.

What the Viking Fire slot game does have is top notch graphics. The Viking Fire slot graphics have been designed in wonderful 3D, and there is plenty of animation to enjoy upon the reels of this slot. Players will find the game a little heavy on their systems if they are used older devices, but the same is true of all 3D animated slots.

The Viking Fire video slot features a broad wagering range. It is not the most flexible wagering range you will come across, but the game can still see you able to choose coin values which range from 0.01 up to 25.00 in all. This will see your total bet stem from 0.40 per spin, up to a rather gargantuan 1,250.00 per spin in all.

Players who are familiar with Norse mythology will want to keep their eyes out for Mjönir. If you’re not, that is the Old Norse name for Thor’s Hammer. This symbol is a wild icon, and it can substitute for all standard paying icons in the slot. Wins with wilds will also find themselves doubled, which is very handy.

Scatters appear as burning signet rings. These symbols can appear on three or more reels to trigger this slot’s singular bonus round. Players can also pocket scattered total bet multipliers worth 2x, 10x, or 50x for landing 3, 4 or 5 scatters in any positions on the reels.

You probably won’t be interested, but there is also a gamble feature in this slot. It can be triggered after any winning spin and can see players guessing the colours or suits of cards to double or quadruple their winnings.

The only bonus round to feature in Viking Fire is a free spins feature. Truth be told, there could have been a few more Viking Fire slot bonuses to make us really enjoy it, but this is all you’re going to get. In the bonus, players can choose several ships to land extra free spins to add to their initial five spins, and they can land wild Viking, princess, or wizard symbols, too. Yes, wizard symbols in a Viking slot. We’re not sure what that’s about, either.

Of all the Viking-themed slots out there, this is not one to shout about. It is fine if you love cheesy themes and 3D graphics, but if you want a serious Viking themed slot, there is little to be had in the Viking Fire slot game.