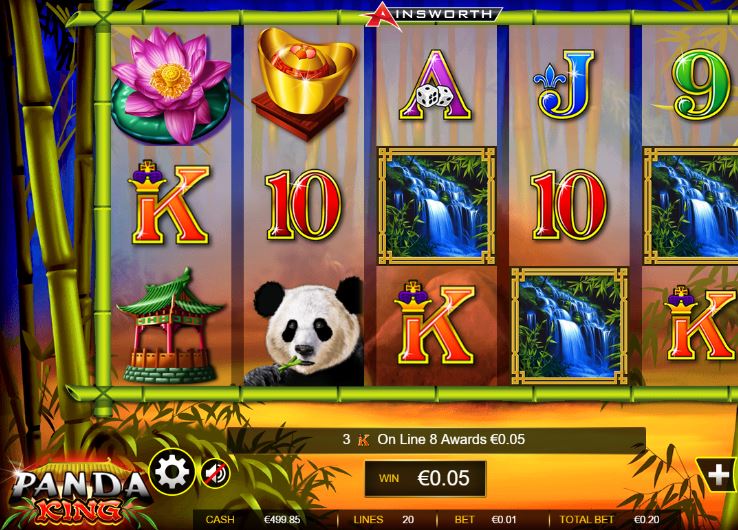 Chinese slots are in

The Panda King slot machine is the newest slot to be released by Ainsworth, and yes, this slot is one of many Chinese themed video slots doing the rounds at the moment. The Panda King video slot is basic and primitive in terms of what it offers and gives you a similar type of gameplay to other titles you’ve played in this genre. How so? Find out in our Panda King slot review.

Ainsworth’s Panda King slot graphics aren’t particularly special. Upon the reels are the same imagery we’ve come to expect from such a slot. There are Yin & Yang symbols, lotus flowers, golden coins, temples and Zen garden imagery, alongside predictable high playing card symbols. The Panda King slot game is stereotypical in nearly everything it offers.

Wagering on the Panda King slot is simple enough. Players can adjust their bets but not the 20 lines which feature in this 5-reel slot. Ultimately, players are going to find that wagers range from a floor of 0.20 per spin, up to a ceiling of 2,000.00 per spin. That is a very broad wagering range which should suit most players.

Panda’s appear as wild symbols in this slot, and when they do crop up, they can replace all other symbols in the game save for scatters. There is nothing inherently special about wild symbols.

Scatter icons, on the other hand, appear as the Yin & Yang symbol. These scatters can offer you paltry wins (3x your total bet) when 3 appear on the reels, although they cannot really be considered multiplier symbols. Scatters can trigger one of three bonuses when they appear on the reels of this slot.

Players who land a five-of-a-kind combination with the fortune character and two wilds in the combination can have their wins doubled, but it is hardly a major addition. Certainly, not like the other Panda King slot bonuses.

Panda King is a bit dull if we’re being totally honest. The slot has its moments, but these mainly come from the free spins feature. You are going to have look long and hard to bag a truly epic win in this simple slot machine game.