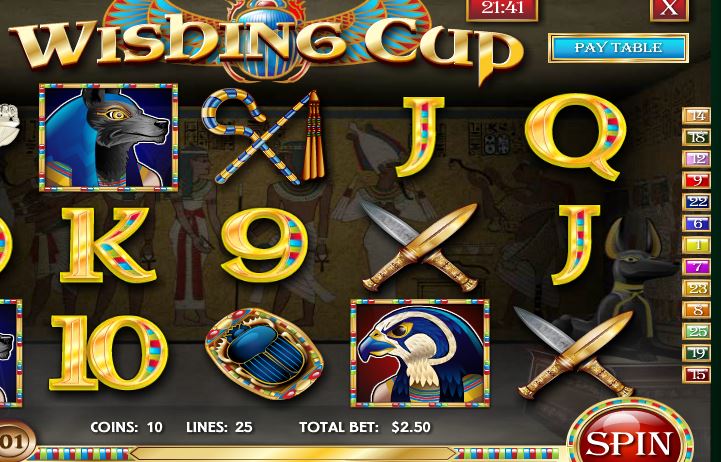 Rival Gaming pulls back the sands of time

Rival Gaming are trying to pull back the sands of time, to a period when Ancient Egyptian themed slots are all the rage. Their new Wishing Cup slot machine certainly doesn’t sound like an Ancient Egyptian themed slot, but rest assured that it is. This new slot machine is capable of offering players a top-notch gaming atmosphere, and as you will see from our Wishing Cup slot review, this is the best game with this theme ever devised by Rival.

The gods are amongst us

Wager your way to success

Players can use the coin value buttons to select coin denominations of 0.01 up to 0.25 to play with and they can bet up to 10 of those per line in this slot game. Minimum bets are fixed at a lowly 0.25 per spin, whilst maximum wagers can rise as high as 62.50 per spin in the Wishing Cup video slot.

Expanding wilds can appear in this game. The wild symbols take the shape of a cup (the Wishing Cup, if you will). When these symbols appear on the reels of the Wishing Cup slot, they can expand upwards to occupy entire reels. Wilds can substitute for all other symbols in the game and are only capable of appearing on the first, second, third, and fourth reels of the slot during the base game.

Players who land 3 or more of the Tutankhamun death mask symbols on the screen will trigger a free spins bonus round. During this feature, players will begin with either 7, 10, or 15 free spins, depending on whether they land 3, 4 or 5 such scatters on the reels of the game.

Scatter icons also appear as the aforementioned Ancient Egyptian gods. They count no matter where they land on the reels, and represent the best symbols in the slot.

The free spins bonus isn’t the only one of the Wishing Cup slot bonuses you can enjoy. Players can also join in the fun with a Secret Passage bonus. This randomly triggered feature can see secret passages open up during regular spins, and when the reels have stopped spinning, players can click on a hidden icon to pocket an instant cash prize.

Is this Rival Gaming’s golden slot?

Is Wishing Cup the most exciting slot ever devised? No. But this is a slot machine which is considerably better than many other Rival Gaming titles, and one which far outweighs many other predictable and boring Ancient Egyptian themed slots out there. You just might get your kick out of this slot.