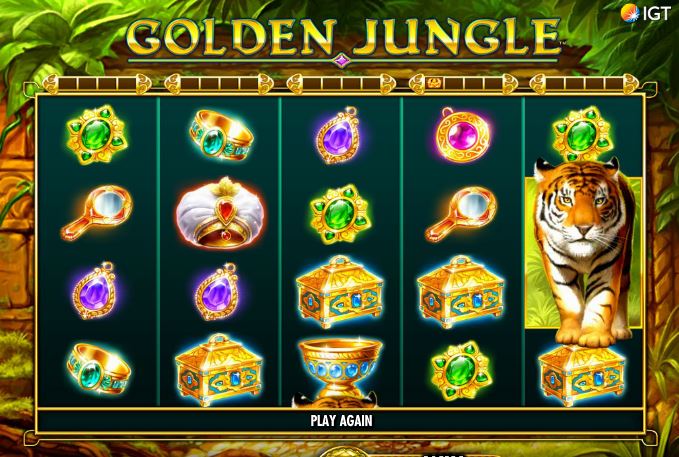 The eye of this tiger-themed slot

The main purpose of this tiger-themed slot is Indian and Javan culture, not necessarily the tigers themselves. That makes it stand out from the aforementioned titles. Most of the Golden Jungle slot graphics focus on various artefacts of Asian culture. This is the only slot of its kind (with this theme) to currently exist in the online casino world, so that makes it rather special.

Gameplay is not exactly golden, but the Golden Jungle slot game can see you wager of 5 reels and 50 lines. Unfortunately, IGT have decided to return to their awkward wagering menu setup. This means insanely rigid wagers. Expect to wager anything from a floor bet of 0.50 per spin, up to a ceiling bet of 2,000.00 per spin on the Golden Jungle video slot.

The features of the Golden Jungle slot aren’t much to write home about, but they certainly aren’t too shabby. There is a Wild Stays 4 Plays feature, which can see all counters above the reels filled when golden Buddha statues appear on the reels. Once a reel has 4 sections filled, that entire reel will become wild for the duration of the next 4 spins. These are not free spins, however.

There is also a golden tiger wild symbol, which doubles as the best-paying symbol in the game as well as the slot’s replacement symbol. It can substitute for all other icons, save for golden Buddha icons, and free spin symbols.

Land 3 or more of the golden archway scatter icons and you will trigger a free spins bonus round.

The features are decent enough in the Golden Jungle slot machine. There is certainly nothing which stands out as particularly remarkable, and we’ve seen the Wild Stays 4 Plays feature before in Microgaming’s Untamed series of animal themed slots. We won’t hold too much against IGT for this slot (save for those really rigid wagers), but Golden Jungle is only satisfactory entertainment at best.