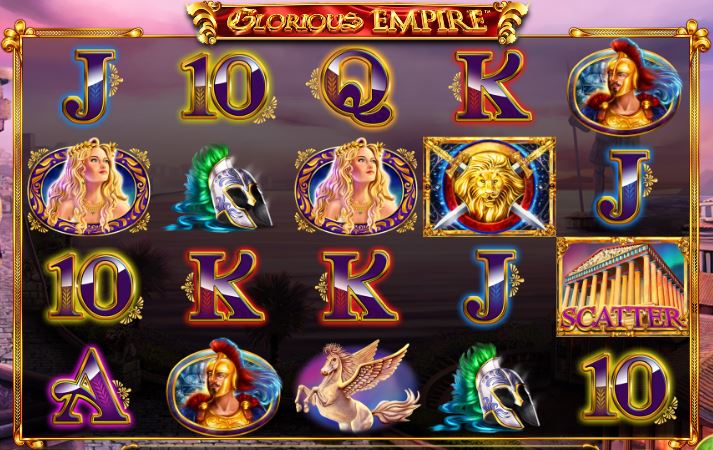 What history is this?

The Glorious Empire slot graphics are not exactly much to write how about. One can love the fusion of the various civilisations, but the graphical quality is standard at best. We’ve seen the same type of imagery appear in countless other NextGen Gaming developed slots, so there’s no breakthrough here.

Players will be able to spin the reels of the Glorious Empire video slot rather cheaply. The coin values located to the bottom left of the reels will see you able to choose coin values which stem from 0.01 up to 10.00. Given that there are 50 lines in this 5-reel slot, expect to be wagering anything from 0.50 per spin, up to 500.00 per spin in total on the game.

The Glorious Empire slot game contains both wilds and scatters. Wild symbols can replace all others in the game barring scatters, and act as the second best-paying symbols in the slot, worth up to 250 coins a pop.

Scatter symbols can offer you scattered wins, including the non-progressive jackpot of 4,000 coins if 5 appear on the reels during a single spin. They can also trigger a free spins bonus round if 3 or more appear on the screen at any one time.

The free games feature is the only real one of Glorious Empire slot bonuses to reward you. It offers up either 7, 10, or 15 scatter icons when you land 3, 4 or 5 such symbols in any positions on the reels. Players can also pocket sticky wilds during this bonus. Any wild symbols which appear will remain in place for the duration of the feature.

The Glorious Empire slot is a decent effort from NextGen Gaming, but it isn’t going to blow any players away. We love the idea that they have tried to fuse together elements of various civilisations and that wagers are cheap, and prizes are decent. However, from a gameplay perspective, we were kind of hoping that NextGen Gaming would really show us something we hadn’t seen before. They didn’t. For that reason, Glorious Empire is a decent but not spectacular slot machine game.