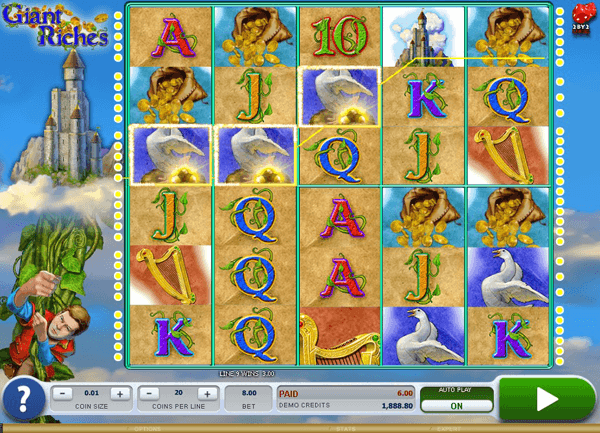 There aren’t many 8-reel video slots out there, but the Giant Riches slot machine is one of them. The first two reels of the Giant Riches slot contain 6 icons, whilst the “third, fourth, and fifth” reels are split in two, making a total of 6 reels (3 on top of the other), each offering 3 symbols apiece. Nobody could accuse 2×2 Gaming of being unoriginal with the design of this slot. How does it work? Find out in our Giant Riches slot review.

The new Giant Riches video slot is based on the tale of Jack and the Beanstalk. There are beans, giants, golden harps, geese, and more present on the reels as images. If that doesn’t do it for you, the image of Jack climbing down the beanstalk to the left of the reels really gives the theme of the Golden Riches slot game away.

Taking your first steps up the beanstalk

Even though there are 60 paylines in this slot, you won’t have to wager on each individual line. Players will be at liberty to select coin values of 0.01 up to 0.20 and stake as many as 20 coins per line. With everything being adjustable (bar the number of lines), you are only going to end up wagering between 0.40 per spin, and 160.00 per spin on this slot. That’s cheaper than the 0.60 and 240.00 minimum and maximum wagers we were expecting.

Back to those 8 reels…

We have to come back to those 8 reels, because the setup is barmy. Basically, it is possible to have 8 of a kind winning combinations in this slot. The third, fourth, and fifth reels run across the top of the screen, whilst the sixth, seventh, and eighth reels run along the bottom. By splitting the reels up and stacking them on top of one another, 2×2 Gaming was able to avoid extending the screen size for the game. That is the only reason for the stacking of the reels.

A wild symbol is present in the Giant Riches video slot, and it can replace all other symbols with the exception of the castle scatter icon. The wild is also the second best paying symbol in the slot, after the scatter.

The second bonus round in the Giant Riches slot machine is a mystery feature. It can occur randomly in both the base game and the free spins bonus, and will see symbols replaced with random ones to bolster your wins.

The Giant Riches slot has some decent moments, but it is hardly filled with riveting fairy-tale features. There is no real reason for the slot to contain 8 reels, its free spins bonus is bland, and its mystery bonus feature seldom turns up. There are better fairy-tale themed video slots out there on the net, but the Giant Riches slot is the only one offering you 8 reels. Aside from that, you aren’t really missing anything.