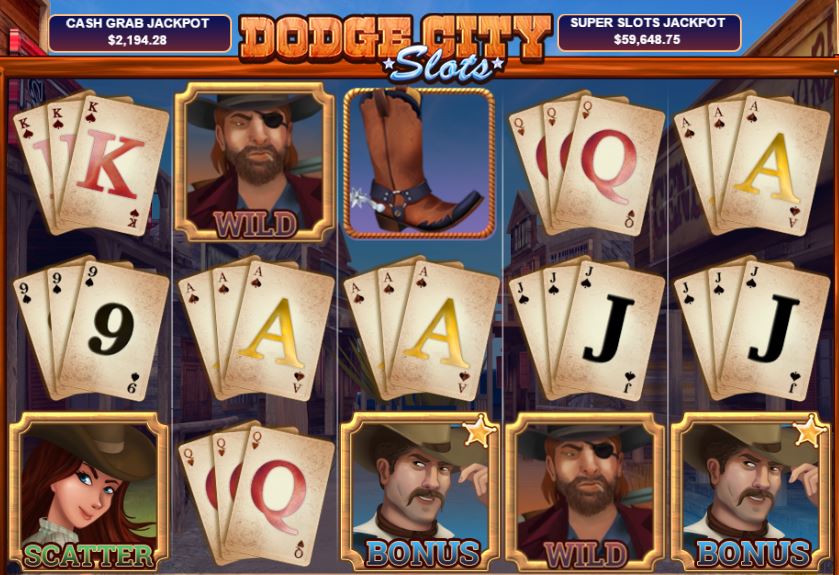 Arrow’s Edge haven’t been renowned for their vast gaming catalogue in the past, so they have tried to create several new games of late. Their Dodge City Slots slot game is their attempt at creating a Wild Western themed video slot. Do they succeed? Can a small-scale developer really take on the larger developers with this theme? Find out in our Dodge City Slots slot review.

Players will have total control of their bets in the Dodge City Slots video slot. Players can choose to alter all 10 lines in the game, as well as select total bets which range from 0.20 per spin, up to 250.00 per spin. That is quite costly for a slot with 10 lines. You are, in effect, paying double the amount you would normally expect, too. Players will be expected a good return from the Dodge City Slots slot, then.

There are progressive jackpots to be won in this slot, and we suppose that this does count for something. There are two of them, and they can see players win a grand or so via the Cash Grab prize, or tens of thousands of credits via the Super Slots pot prize. Jackpots are won at random.

Players who land 3 of the Wyatt symbols on the reels will trigger an instant win bonus. They get to shoot up to 5 outlaws to pocket instant cash prizes.

The scoundrel or villain symbol acts as a wild icon in this game. Wild symbols can substitute for all symbols save for Sally scatters and Wyatt bonus icons.

The most promising of the Dodge City Slots slot bonuses is the free spins feature. You need to land three of the Sally icons on the reels to trigger the feature. Once this has been done, players will get a total of 15 free spins to play with.

Players can land whisky glasses during the free spins bonus, and for every 3 they collect, they will pocket 3 extra spins. Multipliers can also be pocketed with this bonus (up to 3x in all), so whisky glasses are of importance during this bonus round.

One to keep your eye on?

Not really. This is a great slot when it is compared to other Arrow’s Edge games. It doesn’t really compete with the other Wild West-themed video slots from other developers, though, and that is a bit of a shame. It’s not bad, so do give it a once-over, though.