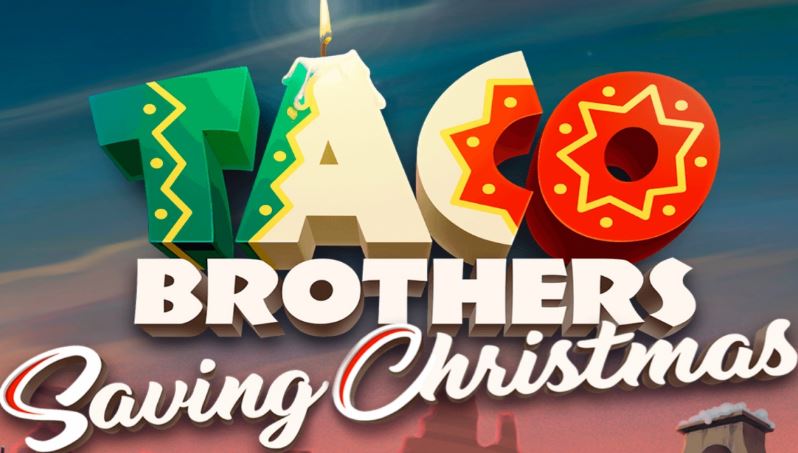 The Tacos Brothers are back

A story worth telling

ñorita as they try to hinder and help the Taco Brothers in their epic journey to save Christmas.

Players are going to find that there are 243 paylines over the 5 reels of this slot. You’ve got a non-progressive jackpot worth 150,000 coins to snap up, too. Wagering is a little restricted in the Taco Brothers: Saving Christmas video slot (as you would expect for a 243-line game), but you can still expect to be able to wager anything from a dirt cheap 0.10 per spin, up to 50.00 per spin. That’s positively a steal.

The Taco Brothers: Saving Christmas slot game contains wild symbols in the shape of a Christmas bell. These wilds can replace all other icons in the game, barring the safe and Taco Brothers wild symbols. These secondary wilds can trigger re-spins when they crop up, and they can see you stand another chance of bagging the bonus round if you missed it the first time.

Scatter icons appear as safes. This symbols appearing 3 times on the reels will trigger a Wild Escape bonus. Even though you technically need 3 scatters to trigger the bonus, you can do it with just two with the re-spin feature.

The free spins feature is easily the best of the Taco Brothers: Saving Christmas slot bonuses. This is because you technically start out with an unlimited number of free spins. Whenever Captain Diaz appears on the reels he will imprison the Taco Brother wilds, which walk their way across the reels. Señorita can free them. Free spins only end if the three brothers are all caught, or if Señorita helps them escape across the reels.

The Taco Brothers: Saving Christmas slot machine is certainly a worthy successor to the popular Taco Brothers slot. There is a lot of fun to be had with this game. It is cheap as chips to play given how paylines you get, and the features aren’t that shabby, either.