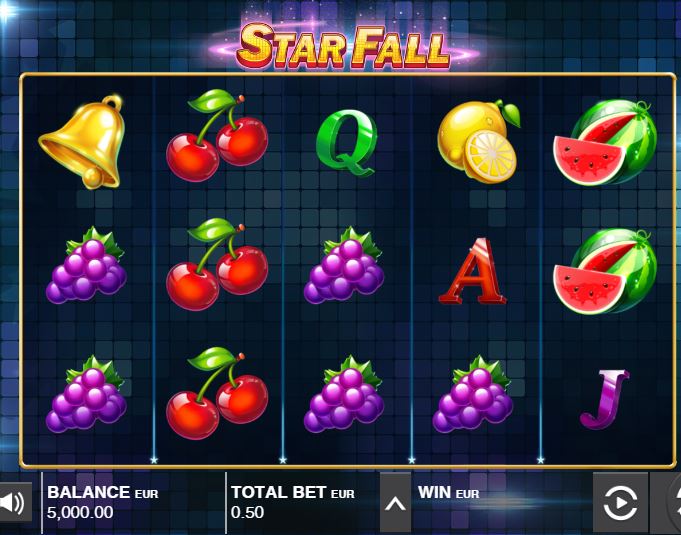 Even since NetEnt’s Starburst became a runaway success, several developers have jumped on the bandwagon and produced slots which are “similar”. Push Gaming’s Star Fall slot machine is one such example of this. The Star Fall slot has does have its original features, but writing our Star Fall slot review, it is going to be tough to escape that feeling of sameness.

What is original then?

As we’ve said, there are a few original features in this slot, such as the Star Fall slot graphics. There are fruit symbols, and other classic slot imagery and this slot contains wilds, scatters and a free spins bonus, as well as a re-spins feature. The same cannot be said of the Starburst slot machine.

The Star Fall video slot has 25 paylines to offer you (as opposed to Starburst’s 15 lines), but players are not going to be able to adjust those lines. At its cheapest, the Star Fall slot game will cost player around about 0.25 per spin, whilst at its costliest, it will set them back 100.00 per spin. That’s about average for this kind of slot.

Star Fall contains wild symbols in the shape of stars. These stars can substitute for all other symbols barring coin icons and can appear stacked on the reels of the slot. Wilds do not offer cash prizes, though, which is a bit dull.

Scatter icons appear as coins, and they can appear stacked, too. These symbols only appear on the middle reel, but can trigger a free spins bonus round when they do crop up.

A re-spins feature is playable in this game. Any win featuring wild symbols can see Falling Will re-spins begin. These wilds will remain locked into place whilst the remaining reels are spun again. As long as you keep landing wilds, you can keep bagging re-spins.

And then the free spins

The re-spins feature in the Star Fall slot is decent, but the best of the Star Fall slot bonuses is the proper free spins feature. It is triggered by the aforementioned scatter icons. Once the bonus begins, players will get a total of 6 free spins. During the bonus, players can collect coins and once 3 coins are collected, a wild reel will appear which will remain in place for the duration of the free spins bonus feature.

Star Fall has its moments, but one cannot but help feel as though this slot just doesn’t quite drive home the goods as it should. It is similar to Starburst in terms of theme, re-spin feature, and structure, but it does actually excel above it in other areas. The small-scale nature of Push Gaming virtually ensures that Star Fall won’t meet the same critical acclaim as its rival, though.