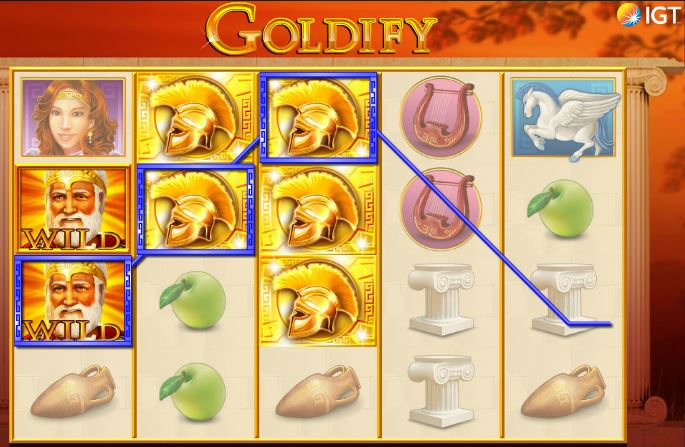 There are a number of King Midas themed slots out there, some of which are top notch games. Why IGT decided to bring their own to this already crowded table is a puzzle. The Goldify slot isn’t that original in either theme or features, but IGT have chosen to develop and release the Goldify slot machine anyway.

To begin our Goldify slot review, we should start by looking at the Goldify slot graphics. They aren’t spectacular. In fact, IGT seems to have dialled down the creativity a notch with this slot. Graphically, this slot wouldn’t look out of place as a new game few years ago, but its imagery is considerably less impressive today. One can only hope that the specials and bonuses are of a considerably greater quality.

IGT are back to their old tricks

IGT are back to their old tricks in terms of wagers. The company has made some progress of late, making their paylines adjustable and their wagers flexible. There’s none of that in the 5-reel, 40-line Goldify video slot. Instead, the Goldify slot game features coin values of 0.01 up to 0.50, and that will see you wagering anything from 0.40 per spin, up to 2,000.00 per spin. This is a costly little number from IGT.

Goldify gets its name from its Goldified Symbols. Just like King Midas could turn things to go by touching them, these symbols appear golden and are far more rewarding than the standard icons. They offer up winnings worth 5x the normal rate of pay.

Scatter icons appear as a hand touching a rose. They can offer you a free spins feature when 3, 4 or 5 such symbols appear anywhere on the reels. Players will want to get as many scatters as possible, since that will dictate how many spins they start the bonus with.

Wild symbols are also present in Goldify, and they appear as King Midas. These symbols can replace all others in the game barring scatters, and other Goldified Symbols. Wilds can see you win the non-progressive jackpot when 5 appear on any payline.

Spin and win on Goldify

As we’ve said, there is nothing terribly impressive about this game, and that includes the main feature of the Goldify slot bonuses. This free spins feature will see you begin with 15, 50, or 100 free spins, depending on whether you land 3, 4 or 5 scatters. During the feature, players are guaranteed to land between 3 and 5 Goldified Symbols on the reels, but wins seem few and far between, despite the sheer number of spins coughed up in the feature.

Goldify could have been something special. The poor graphics and wagering range, as well the lack of any real scattered wins from scatter icons make for a disappointing experience, though. Players may still get a kick out of the bonus round if it goes their way; if not, there are plenty of other Midas themed slots out there that will check your boxes.