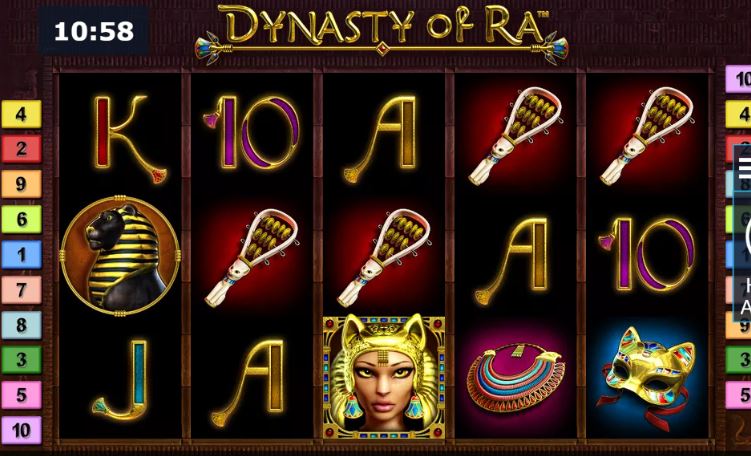 Novomatic jumps on the bandwagon

Ancient Egypt is back…kind of

Novomatic have tried to take on the Ancient Egyptian theme replicated by others in their new game. However, if you take one look at the Dynasty of Ra slot graphics, you will see that they have been quite literally copying their rivals. The imagery in this slot remains the same as in other slots, and we’ve seen it all before.

Novomatic has never really been on top of their game when it comes to flexible wagers, and that poor tradition continues with the Dynasty of Ra video slot. Players can alter all 10 lines on this slot’s 5 reels, and they can choose to wager up to 400 coins per line. What does that do to the wagering range in the Dynasty of Ra slot game? It makes it have a floor bet of 4.00 per spin, and a ceiling bet of 4,000.00 per spin. Those aren’t friendly wagers at all.

Features are equally as flimsy in this slot machine. Dynasty of Ra contains a golden scatter wild icon. This scatter icon can see you win as much as 800,000 coins if you land 5 anywhere on the reels. They can also offer themselves up as substitute symbols and can substitute for all other symbols in the slot without exception.

Players who land 3 or more of the scatter icons anywhere on the reels will trigger the singular bonus feature in this slot.

The free spins bonus is fantastic when comparing it to all other aspects of this slot. In comparison to other slot’s bonuses, it is beige at best. The only one of the Dynasty of Ra slot bonuses to appear, free spins can see symbols which appear in winning combinations expand to occupy whole reels, thereby boosting your chances of landing a win. Scatters are not wild in this feature, which further bad news for the player.

Should Dynasty of Ra remain buried in the sand forever?

Novomatic haven’t done the Ancient Egyptian genre justice with their Dynasty of Ra slot. The game is too predictable. We’ve seen all the imagery before, we’ve seen the features before, and the wagering range is a mess – and we’re holding back there. There are better Ancient Egyptian themed slots out there, and ones which offer you so much more, for wagers costing considerably less.